And yes, I am Alain Tanguy, yoga teacher.

In 1995 I discovered Yoga thanks to the advice of an energy therapist. She had advised me Yoga, or sophrology, because I needed to channel myself. At the time there was a yoga class down the street from my house, so I went there. I just went, in the first session of the year and discovered the benefits of Yoga.

As you can see, my first steps in yoga were as a student through the practice of asanas (postures), pranayama (breathing), relaxation and meditation. To be totally honest, the state of mediation was very far from me when I started. Some students even wondered what I was doing taking yoga classes. That was my first and essential step towards becoming a yoga teacher.

One fundamental thing to note is that it is important to have a regular yoga practice for it to work. I would go once a week and practice Hatha Yoga.

Concerning these changes on me, it is especially my entourage that noticed it first. I had acquired a certain serenity. I had acquired the benefits of yoga through better alignment. I was on my way to becoming a yogi.

One important thing too, I will always remember the Zen state at the first course I attended. This course was important to me, it focused on pranayama (breathing).

WHY GO FROM STUDENT TO YOGA TEACHER?

I have noticed changes about myself as a result of practicing yoga, so a good idea to take the next step in learning. At the time I was working as an accountant and IT manager, the idea of being a yoga teacher was far from me and yet …

My first yoga class taught was a revelation, thanks to standing in front of student pupils, watching them practice. Noting that at the end of that first session, a friend who was entertaining later made it clear to me that her children did not want her to come home so upset after a yoga session. That was the first one a little indulgence all the same.

So I followed a training, Alain Tanguy yoga teacher:

This 4-year training course completely transformed me, indeed it was a revelation of what I wanted to become. In addition to the postures and yoga sessions, we learned the anatomy and philosophy of yoga. Claude Maréchal et Sylviane Gianina, among other teachers, helped me find my way in teaching yoga.

Important parts of the course are relaxation and meditation. The philosophy during the yoga training was also a rich thing for me.
Link to their website : IFY

The Viniyoga training I took is based on traditional Hatha-yoga. That is, the search for unity, always trying to find a balance between body and mind.

The teacher’s diploma obtained, I then continued to study for 3 years to gain more knowledge. Again, it was just as rich as the first 4 years.

Then, complementary techniques of yoga:

To improve the relaxations and the mediation in the Yoga sessions, this additional part imposed itself to me. It is important to allow people to relax well at the end of the session and then leave as soon as the yoga session is over.

I have worn glasses for many years and this technique helps me to work my eyes. Simply, let’s remember that the eyes are muscles, so they need to work. See on the site, the link here : Yoga des yeux to find out a little more.

The YOGA OF LAUGHTER COME FOLLOWING

In 2015 a new training: laughter yoga teacher. This allowed me to complete the Laughter Facilitator training and learn much more.
A link on the website to learn more: Yoga du rire

A journey to discover the origins of yoga

In 2015, the discovery of India and its mysteries thanks to Richard who made us discover his country. It was really fabulous to be able to give yoga classes in the country that is the origin of yoga. As you have understood, it is an India that this trip was made.

I have given many yoga sessions in animation for companies, the company Dawan allowed me to develop 30 minutes classes in companies for 3 years.

A plus that allows me to have additional tools during my yoga classes, as much on the collective side as on the individual side for individuals or companies.
This training was done in the Dawan company where I worked for a few years and at the same time gave yoga classes in companies.

This evaluation allowed me to understand much better how I function with a brain that is always in action. The High Intellectual Potential, far be it from me to talk about being more intelligent, it is more a different way of reasoning.

Additional skills:
I acquired, during the trainings that I could make of the competences in several complementary fields of Yoga:

Relaxation, Eye Yoga, Yoga for children, Yoga for the elderly, Yoga for pregnant women, Yoga for people with disabilities and of course Yoga in companies.

All of this can be given in workshops, courses or conferences, either in private or group classes for all types of public (individuals, companies, associations, retirement homes and others that I may have forgotten).

Any person can practice yoga, so people with disabilities can practice. The trick is to be inventive and dare to try, with the complicity of the practitioners which is important.

the first group that was created with a friend, is called Zen Words and Actions to be. Its creation dates from March 2014. it was created to allow everyone to communicate. 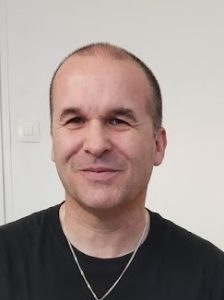